It’s unclear which part of his stellar play was most impressive. In addition to shooting 11-13 from three point range, Curry added six rebounds, and seven assists. The stat line doesn’t show how hard he had to work to score. Regardless of some open looks in the second quarter, as the game wore on, the Knicks made adjustments to double-team and trap Curry. Crafty ball handling helped Curry navigate to open space, and timely passes found teammates in scoring position. After such a complete game, fans can’t help but wonder is Curry ready to burden the weight of superstardom?

“It is the best place on Earth to play an NBA basketball game. I’m mean it’s the Mecca. Everyone that plays loves playing in the Garden,” said former San Antonio Spur, Bruce Bowen, in a post-game analysis.

Both Kobe and LeBron led their teams to victory on their respective nights, but Curry’s efforts resulted in a loss.Yet, losing only diminished Curry’s efforts in the team’s win-loss column.

Curry’s unconscious shooting captured the attention of many NBA aficionados, while garnering newfound respect from opposing players and even coaches that may have slighted him of his first all-star appearance. After all, how often does a crowd cheer somebody on when they’re dropping buckets on their beloved home team?

Curry is no stranger to carrying a team. He catapulted the Davidson Wildcat’s Cinderella title run leading his team in scoring to the tune of 28.6 points per game. Keep in mind that a college game lasts 40 minutes, which is eight minutes less than an NBA game.

Nobody know’s what had Curry so fired up. Maybe he knew his team needed his aggressive scoring mentality and leadership in the midst of David Lee’s suspension, or maybe because his pockets were $35,000 lighter from a fine passed down by the league office for his minor role in a skirmish with the Pacers. Nevertheless, Curry was on fire.

Granted Curry’s ankles might not support the weight of superstardom,  his shoulders demonstrate a pure shooting stroke, leadership, and fearless play  that  foreshadows a boundless future.

Ironically, Curry penned “I can do all things” on the toe of his flamboyant, electric blue and gold shoes. He scored 54 points, kept his teammates involved and entertained the audience by showing a portion of his personality as he shimmied down the court in celebratory ode to coach Mark Jackson. Last night Curry may have become an NBA superstar, and he did do “all things” – except win. 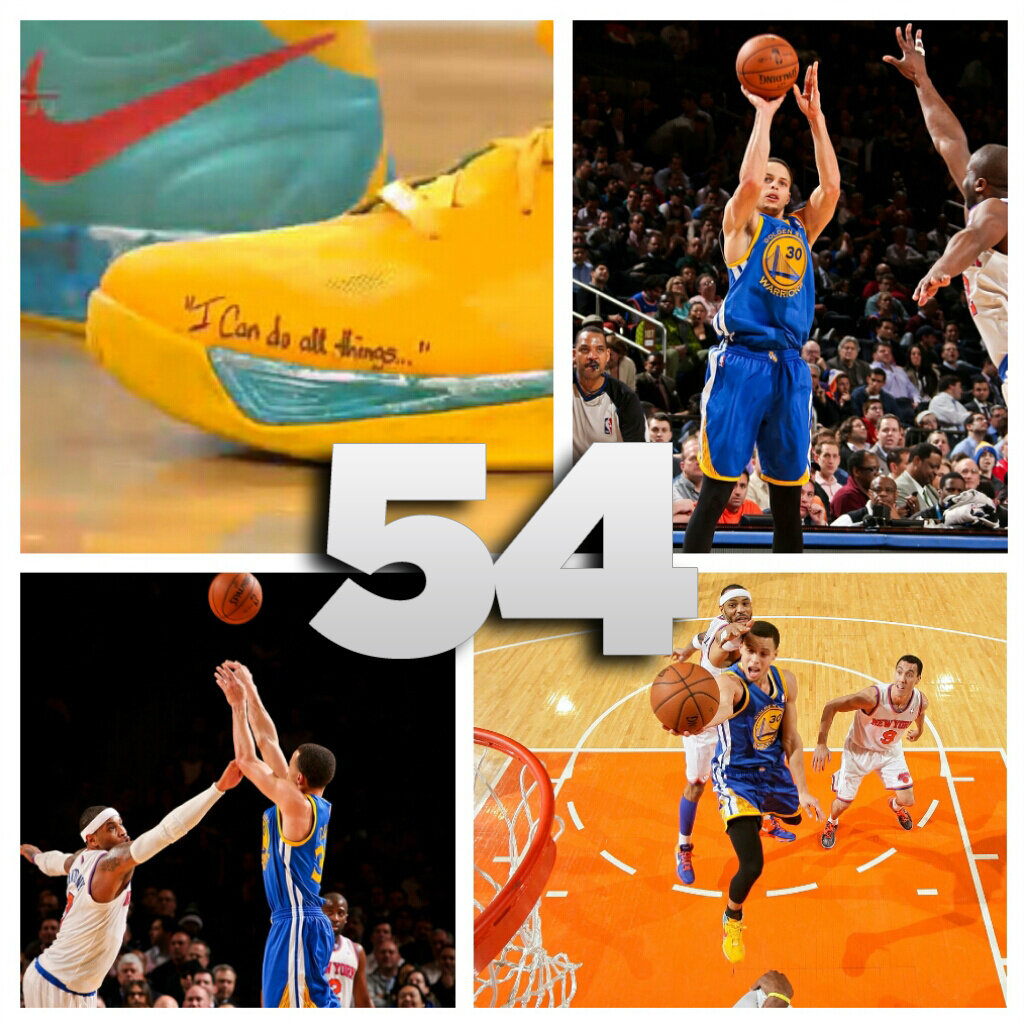 I can do all things.

Dwight Howard’s look as a Laker

Late Thursday night, news broke that Howard will become a Laker by way of a four-team trade involving the Lakers, Magic, Nuggets and 76ers. The main stipulations are as follows: obviously the Lakers receive Dwight Howard, Denver gets Andre Igoudala, Philadelphia obtains the services of Jason Richardson and Andrew Bynum, and finally, Orlando acquires Al Harrington, Aaron Afflalo, Nikola Vucevic and a protected future first-round pick from the other three teams (Lakers, 76ers, and Nuggets) involved.

A trade call has been scheduled Friday with the NBA league office to assure that deal goes official, according to Marc Stein and ESPNLosAngeles.com’s Ramona Shelburne.

Ironically enough, the Lakers managed to keep Pau Gasol on their active roster. His name repeatedly floated in and out of trade talks, and initial reports penciled his destination in Orlando.

On the other hand, the Lakers agreed to move Andrew Bynum to Philadelphia. The 76ers are willing to gamble with the possibility of Bynum opting out of his contract after the coming season. Bynum grew up approximately one hour outside of Philly in Plainsboro, New Jersey.

Throughout the offseason Bynum has maintained that he wouldn’t sign an extension with any team but the Lakers. Returning close to home may help sway his decision, but Bynum now has the option of signing a three-year, $60 million extension with the 76ers, or become a free agent and potentially ink a max, five-year deal worth $102 million.

The Howard saga has been an ongoing issue since last season when he wavered between desires of staying in Orland and requests of being traded. In recent weeks Howard steadily expressed that if he wasn’t traded he would test free agency.

Los Angeles has a potential dilemma similar to the Bynum situation in Philly. The Lakers have no assurance that Howard will agree to a new deal after this season, but have expressed beliefs that he (Howard) will stay upon experiencing a championship culture.

Although all parties involved agreed to the conditions, the deal won’t become official until the league office verifies. So, barring another intervention by Commissioner David Stern, the Dwight Howard episode will end with him sporting the Laker’s purple and gold next season alongside Kobe Bryant, Steve Nash, and Pau Gasol.

The ubiquitous story of Dwight Howard’s potential departure from Orlando has been both a distraction from relevant NBA news and annoying.

I can’t tune my TV to ESPN for more than 20 minutes before there’s an update about Dwight Howard and his most recent stance. What’s worse is that these supposed updates don’t contain any new news. The “updates” merely consists of fluctuations from Howard’s previous platform.

In the eyes of media and fans alike, Howard can’t come to a definitive answer about what he wants. Subsequently, the constant switching of “I want to be traded” and “I love Orlando, and want to stay here” has annoyed true NBA fans to no end, regardless of whether their favorite team has a stake in his potential destination.

Howard, as well as his entourage of representatives, should assume fault with much of the ownness falling squarely on Howard’s shoulders. It’s shameful that one of the NBA’s most likeable stars has placed himself in position to have his reputation tarnished forever. Howard consistently leads the league in rebounding, so he better hope his reputation has the same uncanny ability to rebound.

His inconsistency concerning wishes about where to play next year has alienated his teammates and Orlando fan base. It’s absolutely ridiculous how Howard has disserviced his fans and supporters in Orlando. For means of personal gain and the desire to “build his brand,” Howard seemingly has forgotten that acquriring and retaining fan loyalty represents a large portion of brand building. Consumers don’t buy products produced or endorsed by people or companies they dont like.

Orlando may not possess the marquee market status that the Miami Heat, Los Angeles Lakers or New York Knicks have, but is Orlando really that small of a market? How can the home of Disneyworld, Universal Studios, Sea World and Island of Adventures fall into a small market category.

Realistically speaking, people come from all around the world to visit attractions in Oralando. Furthermore, bastketball extends beyond United State’s borders. The 12 teams currently competing in London’s 2012 Olympics offers proof, and that disregards an array of other nations that failed to qualify. Howards concerns stating that Orlando doesn’t possess a large enough market are invalid.

Yet, more has been sacrificed in Orlando’s frantic pursuit to retain Howards Services. The Magic fired capable coach Stan Van Gundy, and separated with their tenured general manager, (GM) Otis Smith, in attempts to appease Howard.

Van Gundy generated 259 wins versus 135 loses in the regular seadson, 31-28 in the playoffs, during his 5-year stint as head coach, and Smith was responsible for building teams that made the playoffs in six consecutive seasons including a NBA Finals appearance in 2009, according to Associated Press.

It’s absurb that Howard caused two competent individuals to lose thier jobs in the midst of his primmadonna soap opera. He should have to reimburse them for lost wages, especially since its clear that he wont be staying in Orlando beyond next season.

LeBron James receieved unparalled crititcism for his role in Nike’s mass production of “The Decision,” in addition to the way fans felt he shafted his hometown, but Howard’s episode may be worse. In essence, Howard makes LeBron’s heavily criticized decision look like an ideal business model. At least Lebron’s decision didnt waver every other week.

Howard’s nickname,  “Superman”, hasn’t served this situation justice. Instead he should be berated with the NFL’s phrase of disapproval “C’mon Man!”

Dwight Howard, his agents, the media and anybody else surrounding this pig sty of a situation could do fans a great favor if they kept these so-called updates quiet. It’s no longer relevant in fan’s eyes, and quite frankly, nobody cares! So when, or if, Howard ever gets traded wait until then to break the news/update.